The Respin Rhino Slot is a five reel slot with four rows and 40 paylines. The game comes from the Australian software developer Lightning Box Games. Respins Rhino has a Safari theme with some interesting bonus features. Thats included expanding Wild Symbols and a Re-spins feature. You can play the Respin Rhino slot from 40p up to a maximum of £200 per spin. The slot is fully compatible on all devices including Smart Phones, Tablets and Desktop. Similar Lightning Box Games Slots are More Monkeys and the Silver Line Slot. 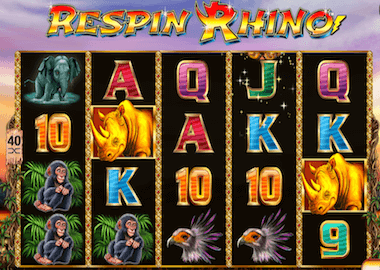 Symbols and Payouts: The Respin Rhino slot has a rather average graphic. The advantage is that the game starts very fast and you can play it without interruption while on the move. The symbols are partially animated and includes poker playing cards symbols and themed symbols. The playing card symbols pay you less big winnings but land more often on your reels. The higher paying symbols are some wild animals like monkeys, elephants or tigers. Last named symbol is the most valuable symbol and pays 100x your bet. All symbols can also land as full reel gold symbols on reels 1 and 5.

Wild Symbol: Although the Respin Rhino Slot does not have a Free Spins feature, there are two features that can be activated together. First, you play with a wild symbol (The Lady with the Purple Rock) which lands only on the reels 2 and 4. Regardless of the symbol’s position, it always covers a full reel. If you manage to land on both reels, you are guaranteed greater profits. Especially with the high paying symbols you can get some amazing profits here. In conjunction with Respins goes even more …

Respin Feature: The Respins feature replaces the free spins feature, so to speak. The advantage is that you can trigger it quite often. To do that you have to land on the reels one and five 8 identical gold symbols. This can also be playing cards symbols, because then they are converted into the valuable symbol. It’s the Gold Rhino symbol that pays up to 105x your bet. Then you get 3 respins with the gold rhinos stacked on reel 1 and 5. If one or both wild symbols land on the reels 2 and 4, you extend the respins. In addition, with this combination, you can raise the top win of 4200x your bet, which equals £21.000.

Where you can play the Respin Rhino Online Slot

The Respins Rhino Slot is certainly not the top game of Lightning Box Games. Without a true Respins feature, the game will be lacking in real kick and even the top win is not particularly high with a bet of £200 per spins. You can play the slot here for free. Click on the Respin Rhino Slot Banner above. You can also play Lightning Box Slots on the Review page. If you want to play for real money, visit Spinland Casino, Grand Ivy or Spin Station Casino. There you can play with a nice welcome bonus and a lot of free spins after your registration.